A brief profile of Simon Appel 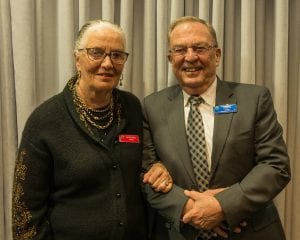 Simon was awarded the OAM in 2007 for his contribution to the Pharmaceutical Industry and to Education.

Simon began in which he made his career between 1971 and his retirement in 2014.

Born in Melbourne and Educated at Caulfield Grammar and Geelong College, Simon graduated from the Victorian College of Pharmacy (now Monash) in 1967.

He purchased his father’s Pharmacy in Ripponlea in 1972, and later partnered in two additional Pharmacies trading as: “Appels Pharmacy”. The pharmacies created news when they pioneered extended trading in the early 1980’s being among the first to trade 7 days per week, 9.00 am to 9.00 pm.

Appels were to Pharmacy retailing what Penhalluriacks’ was to hardware. Together they challenged and eventually succeeded in changing shopping trading hours.

Simon was elected to the Council of Pharmaceutical Society of Australia in 1977, and in 1980 to the Board of Sigma Pharmaceuticals.

He was a Director of Sigma for 10 years and Chairman for 5 years.

Simon sold his interests in Appels Pharmacies in 1993.

In 1991, Simon was appointed Project Manager of the RUM Project…. Now the RUM project wasn’t a mid-life-crisis that saw Simon changing careers and heading to the Caribbean…. it is a vitally important imitative to control mis-management and environmental damage from disposal of out of date and unwanted medicines.

The RUM acronym stands for “Return of Unwanted Medicines”. Simon managed this project until his retirement in 2014. The Rum Project continues.

Simon has had a lifelong interest in Education and joined the Board of Mentone Grammar School in 2005. He was Chairman from 2007 to 2017 and remains a Director.

Simon married Barbara in 1967 and they have three boys and six grandchildren.

Simon was known at Probus as one of the “Greeters” at our Monthly meetings. He started up our newest “Interest Group’…. The Travel Group.

Simon was President in 2020