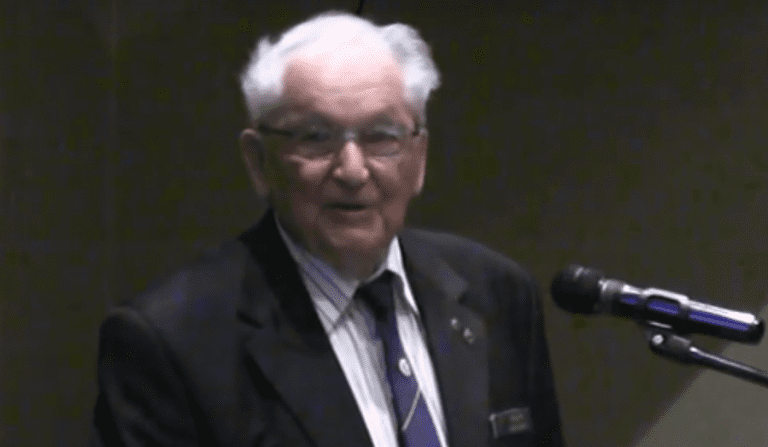 Ralph Butcher joined Probus in 1989 and has served as Assistant Functions Officer, ,Functions and Activities Officer and in 1996, President.

Ralph was born in London on June 24, 1918, in the final months of World War One and taken to Papua in 1919.  His father was a pioneer missionary in the Kikori River Delta area, notorious for its cannibalism.  The only contact with the outside world was by a small supply boat which visited every three or four months.  Ralph lived there with his parents and sisters for six and a half years.

In 1925 he was sent to boarding school in Sydney and in 1933 his parents took him to London and left him in a boarding school while they returned to Papua.  There he completed his schooling and universities studies just as World War Two commenced. He was unable to join the Australian Army in England so as the German Army was nearing the French Channel coast so he volunteered for service with the British Army and served with them for the next six and a half years, in the UK, Egypt, Libya, Sicily, Italy and Greece, where he received a ‘Mention in Dispatches. His last army appointment was in the UK with a unit established to receive British Prisoners of War and assist them in their return to civilian life. This led to a change in his career plan leading to his employment in the Human Resource area.

About this time, he met and married an English girl, Christine Manning, who joined him on the ship repatriating him back to Australia.  They arrived in Melbourne on Christmas Eve 1946 and then made their way to his parent’s home in Sydney.

In February 1947 he joined BHP Newcastle Steelworks supervising the training of apprentices.  In 1956 he moved to BHP’s head office in Melbourne, where he rose to Executive Officer of Personnel and Training.  In 1968 he joined CRA (Rio Tinto) as Personnel Manager and retired in 1980 after which he carried on with consulting work for a few more years.

Ralph was given a very unusual task 1954 with a Royal Tour imminent. He was given the task of preparing for the visit of the Queen and Prince Philip. The tasks included things such as boarding up the urinal in the executive’s toilet, putting up a new flagpole, preparing the steps for the Queen to use and finally participating in the dress rehearsal.  It was Ralph’s job to act as the Queen which meant being driven around the works in the back seat of the Royal Daimler while constantly being cheered and jeered by the workforce.  It was perhaps his finest hour.

Ralph’s joined Legacy Australia in 1949. Legacy cares for war widows and their children. In 1984 Ralph was one of five Legacy members that formed the Beaumaris Legacy Widows Club. he is still that club’s Contact Legatee.

Ralph was asked to join the Citizen’s Military Force (CMF). In 1949 he formed and commanded 111 Infantry Workshops. He did this until he moved to Melbourne in 1956.

Ralph has always had an interest in community work and through his two girls the Girl Guide Movement took up some of his time.  This involvement resulted in the building of the present Girl Guides Hall in Beaumaris.  In those days he was also active in the old Progress Association of Beaumaris.

These days Ralph attends the monthly Dad’s Army Lunch at Yarra Yarra to keep in touch with his golfing mates, but no longer plays the game as he was hitting the ball out of sight and this created problems.  Probus, Legacy and the War Widow’s Club, family and friends have filled his life since he lost Chris, in early 2010, after a wonderful marriage of sixty-three years.

Today Ralph resides happily in the retirement Village, The George, in Sandringham.