This year our lunch was held at President Roger’s Golf Club.  We had traditional Christmas fare, excellent service by staff, and a great atmosphere and outlook from the Elsternwick Room over the 6th and 18th greens
We had a great talk by Club President Jeffrey Knight on the History of Kingston Heath on a golf course in the Top 20 golf courses in the world.
Lloyd Jenkins delivered a poem he wrote especially for the event titled “Ode to the president” (Click here to read it)

Thanks to Andy Coogan for excellently organising the event.

It was a wonderful  and very special evening. It was held at the Sandringham Yacht Club on Thursday 28th June.

116 members and their wives and partners attended this special occasion as well as Ralph’s daughters, Susan and Jenny and their husbands.
The highlight of the evening was a “chat” between President Roger Wilson and Ralph which was both emotional and amusing. There was a slide so of Ralph’s life, decorations, prizes and of course a magnificent cake. Noel Ineson amused us with some of his jokes as well.
Ralph’s favourite music – Vera Lynn, added a touch of nostalgia and to finish the evening we all lustily joined in singing “We’ll meet again” We all felt it was a privilege to be present at this wonderful occasion.

Thank you to John Beaty for organising the eventing. Sadly John was not well on the evening and could not attend. 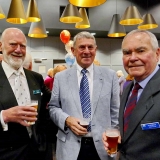 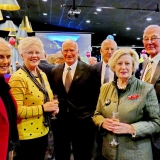 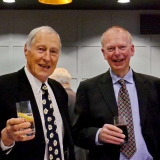 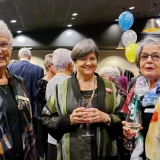 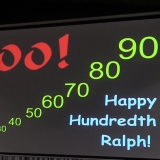 Another wonderful day. Warm and sunny but not too hot. Perfect.
This year the winner was Robert Kerr and Merry Bransbury was a gallant runner up.

John Beaty was the MC and organiser, John Green ran the competition. Tony and Jenny Bowles and the kind helpers from the Sandringham Croquet Club managed the playing of the event. Roger Wilson awarded the trophy to Robert Kerr.
This year we had a new Chef…Geoff Bransbury, assisted by Paul Stephens. Geoff was “trained” by  Peter McGregor who had been the chef on all previous occasions..

The dinner consisted of a topside roast, salad and potatoes followed by the usual magnificent cakes from Brodams in the Concourse.

This is a wonderful event and now in its fourth year. Thank you to all those who helped out.

A superb day was enjoyed by 41 members and friends. It was a beautiful day as we sped over the Bay on the Portarlington Ferry from Docklands. In Portarlington we were met by a bus that took half the group to a superb wine tasting at Scotchman’s Hill. The other half  stayed in Portarlington and were later bussed to Scotchman’s Hill and then on to Jack Rabbit Winery and restaurant,
Jack Rabbit is located at a stunningly beautiful location overlooking the Bay to the City.The two course lunch and a glass of wine was fabulous.

After lunch and very contented, we boarded the bus and returned to the ferry and home.

It was a terrific day and exceptional value at only $85 which included the Lunch, Wine tasting, Bus and Ferry 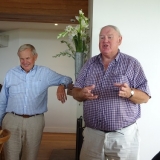 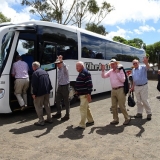 With 24 intrepid players lining up in 8 teams of three, the competition of winners and losers was on.
Those players who were able to remember their skills from last year put them to the test on a very warm night.
The winning team of Don Lobb, John O’Connor and Stan Bernhard had to play off for the trophies.
Don Played John for the “Grand Final” and Don, with a magnificent first bowl, playing it to within inches of the jack could not be beaten.

Congratulations Don Lobb, our 2017 Champion, and John O’Connor, runner up.

The best team of losers were Lloyd Jenkins, John green and John Ragas who were able to bring home this title.

President Ken presented the trophies and thanked the organisers, Stan Bernhard, Ted Montfort, The Sandringham Bowls Club Members who assisted on the Green, all our participants and the ladies who provided another magnificent dinner lead by Cathy Spencer and assisted in the bar by Joan Harwood 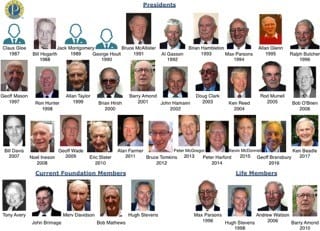 Table mat at our Candlelight Dinner

Click here to see the place mats with photos of our past Presidents, Foundation and Life Members

Our first “Annual” Bowls evening held at the Sandringham Bowls Club was a great success.
A unique and simplified competition was organised by our resident Bowls experts, Ted Montfort and Stan Bernard. Most of us had never played Bowls before
Eight teams of three were each led by someone who had some idea of how to play. They were  Ron Hunter, Peter Flude, Geoff Mason, John Ragas, Stan Bernhard, Ted Montfort, Ken Beadle and Nick Owen, the latter being a Sandringham Club guest player.
The winning team was Paul & Suzi Stephens, Paul Crompton & Ted Montford and Paul Crompton won the playoff for tournament  winner.
The first round losers competition winning team was John Green, Jeff Sturrock & Nick Owen and Jeff Sturrock won the playoff for the bottle of champers. Ted and Nick both graciously declined to bowl in the playoffs to leave the glory? to the novice players.
The trophy which was crafted by Paul Crompton was won by the man himself – Paul Crompton!
A hearty dinner was then enjoyed by all cooked courtesy by the ladies of the Bowls Club.