Celebrating 20 Years -End of an era

Click here to see the “End of an Era” Zoom Video

In November we celebrated our 20 year anniversary with a Zoom meeting attended by 27 members and partners.

However, we’ve decided not to continue.

20 years is a long time and although I have greatly enjoyed the work involved in sourcing and editing the music it now seems an opportune time to stop. In some ways our move from Black Rock led to this decision. It was an unexpected bonus when Margaret’s art studio doubled as an intimate concert hall but when we changed to Beaumaris Library it was no longer the same.

In total we had 124 evenings with videos of 90 composers and most of the better known operas. Among the evenings were 13 annual parties combining music with a sit-down meal in our garden.

We’ll leave it for a while and see whether someone emerges in the future with an entirely new initiative. I wish, in particular, to thank Lloyd Jenkins who has been involved from the outset. His advice, and comments on some of the items being played, have been invaluable

Sadly, the 18th anniversary of the Music group was also the last to be held at 25 Third St as we are moving to Beaumaris in January. A large audience of 39 were present to enjoy a selection of some of the most popular items of classical music. We ended with Lang Lang and Anna Netrebko who have been our favourite performers for many years. Lloyd Jenkins, who has worked with me on music and opera programs since the outset, spoke about the history of the groups and was supported in his kind words by others. Margaret and I have greatly enjoyed the opportunity to host about 120 evenings and hope it may be possible to continue in the new year in some place in some way. 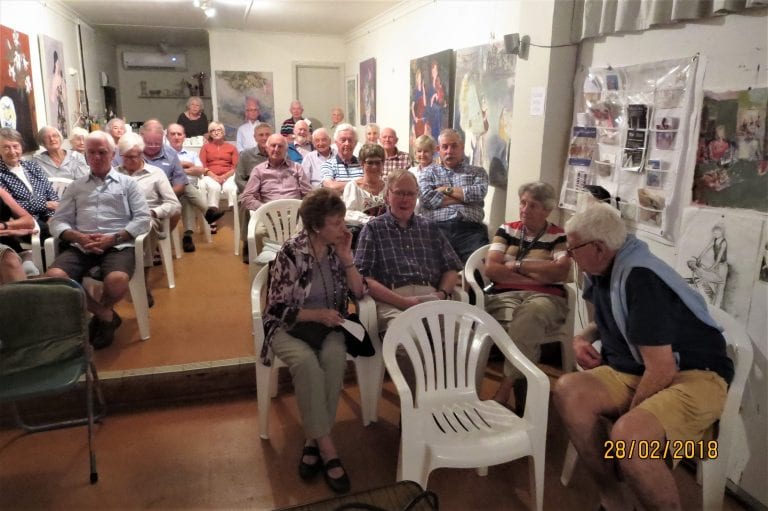 The idea of a MUSIC group was first floated by then president Brian Hirsh in 2000 as a means of providing an easy introduction to classical music as well as saving money on expensive concerts in the City.  Subsequently, 19 members and partners met on 16 November 2000 in Barry and Margaret’s studio to listen to a few CDs and some arias by Bryn Terfel and Yvonne Kenny on video shown on a small TV screen.

The policy of the group is to enjoy ‘classical’ music which is tuneful to the ear. In other words, discordant ‘modern’ music is to be avoided. There have now been 70 such meetings and for the last 9 years the music has been on DVDs which have been projected on to a screen with sound coming from two pairs of stereo speakers.

Music by over 70 composers has been played and typically a program consists of two 45 minute halves with refreshments in the interval. There are usually about 8 items which rarely exceed 15 minutes in length and are often a movement or two of a symphony or concerto , an excerpt from a ballet or concert by singers or musicians. Excerpts from famous musical movies have sometimes been shown at the beginning of the program.

Over 30 usually attend each ‘concert’ and on one occasion there was a very full house of 48. A small committee used to decide on the program but in recent years two of the original members, Lloyd Jenkins and Barry Amond have done it. Barry has been able to find an endless source of first class performances on various TV channels and Lloyd has educated the audience by introducing some of the items in his unique way.

Flowing from the music group an OPERA group was started in May 2003. At first excerpts from up to four operas were shown but since 2006 the program has consisted of a whole opera. Over 30 of the best known operas have been shown at the 34 meetings of the group. The average number attending has been about 25.

We welcome all members and their wives and partners to come along. To find out more contact Barry Amond on bcdamond@gmail.com

Listen here to some of the Group’s favourites:

Please note, there are no Russian subtitles!