A brief profile of Ken Beadle 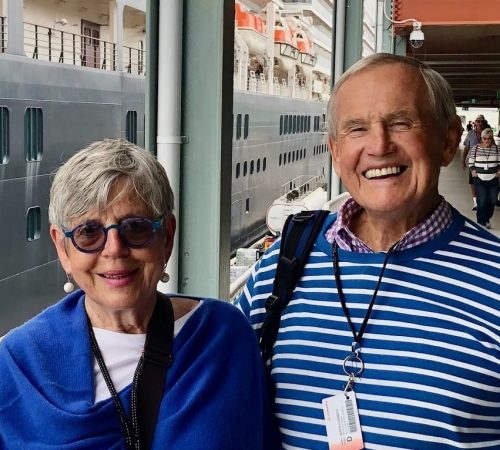 Ken Beadle has come a long way from his working-class roots in the English seaside resort of Scarborough.

He has excelled in his career in the process plants engineering and construction industry; has worked in four continents; has made a significant contribution to the Bayside community; and somehow he and Margie have found time to have three boys and now nine grandchildren. How do you tell this story in a page?

Ken’s clearly remembers wartime Britain. He recalls the whistling sound made by the German bombs dropped on his town before the Luftwaffe planes recrossed the North Sea. He remembers fear, followed by relief, and then fun of kids playing in the rubble the next mornings when school didn’t start until the afternoons.

Ken was a bright student and won a state scholarship to Cambridge University where he spent four years and achieved a degree in Chemical Engineering. It was at Cambridge that he met Margie.

Prior to going to University Ken spent two years with the Royal Navy on National Service. Luck was with Ken as he was posted to Cape Town where he had a wonderful time and his rugby improved significantly. Ken chuckles at the fact that HM’s Government sent him there and back on a passenger liner – no troop carriers sailed to the South Atlantic station.

After university, Ken joined International company Foster Wheeler in London, specialising in the design and construction of oil refineries and chemical plants. Newly married Ken (and Margie) relocated to New York for a year to learn the business at head office! Not a bad career beginning.

Back in London in 1962, Ken specialised in oil refinery projects and in 1965 was assigned as a project engineer for the new BP Cribb Point oil refinery near Hastings, Victoria.  Ken, Margie and one  year old John came to Australia for two years to construct and commission the facilities. And number two son Tom was welcomed into the family in Frankston.

Ken’s career back in London in 1967 blossomed. He became Manager of Engineering with a staff of some 200 engineers and draftsmen. In 1973 he was invited to return to Melbourne as CEO of Foster Wheeler Australia at the age of 38.  So the family uprooted again and settled in Beaumaris.

After three busy years including building a lubricating oil refinery in Adelaide for Mobil, inflation ruled, major project work completely dried up and the decision was made to close the Melbourne office.  Foster Wheeler offered Ken opportunities in both the USA and UK but by this time the family were settled and happy in Australia. So Ken sought new employment and the decision to stay in Australia was made – and never regretted.

Ken joined Johns Perry group as general manager of Bernard Smith division, building pressure vessels and tankage for the oil and minerals industries. The demise of heavy engineering was underway in the early 1980s and with investment ramping up in Australian resource industries, Ken joined international engineer constructor Fluor, where he spent 15 years in projects and marketing roles.  Fluor decided 60th birthdays were also use-by-dates and so Ken got a golden handshake and became a consultant. He spent his last five working years with Krupp Uhde, a German process engineering contractor.

Ken led an Australian Krupp Uhde team in Bangkok for eighteen months to develop specifications and cost estimates for a huge petrochemical products refinery for a Thai company. Sadly, the 1996 devaluation of the baht caused the Thai company to go bankrupt – and the project abandoned.

Over his career, Ken has been involved in some of Australia’s major oil, gas and minerals projects. These include the Ranger Uranium processing plant; offshore platform production plants for Esso/BHP and an explosive grade ammonium nitrate plant at Biloela, Queensland

Throughout his Australian career, Ken has given time to the community and to professional engineering institutions. He was a Rotarian for twelve years and served for six years on the National Council of the Institute of Engineers, Australia. He was awarded the Chemeca 1991 Medal, the top honour for chemical engineers.

After retiring in 2000, Ken was elected as Bayside Councillor for Beaumaris for six years and was Mayor in 1993/4.  Projects championed during his time included the Beaumaris library major extension; an art gallery created in the former Brighton town hall; Black Rock house restoration and the Brighton bike path construction.

We at Beaumaris Probus know well Ken’s enthusiasm and commitment. He was President in 2017 and has been our Functions Manager for many years. He also runs our Bike Group. He is a Committee member of Neighbourhood Watch 3193 and a proud member of the NHW 3193 Graffiti Busters group!

Ken is passionate about music, opera and theatre. He and Margie have travelled extensively on adventure type trips, succumbing only in early 2020 to a cruise around New Zealand.