A brief profile of John McArdle 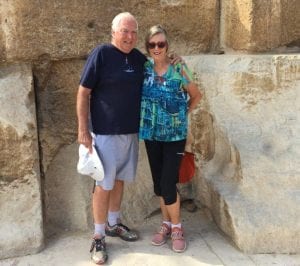 John and BarbaraJohn has lived in Brighton for more than sixty years, he has been married to Barb for 49 years, has five children and 12 grandchildren. He is a 50-year member of the Brighton Icebergers and swims most mornings throughout the year.
He says that his main claim to fame is that, in his younger days, he ran the Brighton Pentathlon for many years, a group of 60 local blokes who regularly ran along the beach, swam, played tennis and cricket and played golf, followed, of course, by the obligatory dinner at one or other of Melbourne’s sand-belt golf courses. Most of this is beyond him these days.

John attended school at St Kevin’s where he was School Captain in 1960 and is now a Life Member of their Football Club. He attended Melbourne University to study law. Surprisingly, while briefly living in the UK, he found himself teaching Senior Maths and coaching the school rugby team, about which he knew almost nothing of either.

Back in Melbourne he specialised in the hospitality industry, working at Williams Winter & Higgs where his clients were buying or selling hotels or applying for licences. His work also involved looking for sites for new licences or potential hotel sites. A partner in the firm, he had to handle the legalities surrounding objections to licences, some of which took many days in court to resolve. One particular example involved seeking and obtaining a licence for a pizza bar in Melbourne – the first such case – having first established to the court that a pizza was a meal.
John has long been involved in charity work in particular on behalf of St Vincent de Paul which had six units in Brighton housing refugee families, many from places as remote as Iraq, Poland, Albania and parts of Africa. With support of friends and a philanthropic owner, John has helped establish a farm on Werribee River water flats for African and Burmese families. Each family has their own plot and grows vegetables for themselves and for trade.

A 50-year member of the MCC, he is also a long-suffering supporter of North Melbourne. He has been a member of Victoria Golf Club for more than 30 years and has played golf in China, New Zealand, Ireland, Scotland and United States. He lists travel as one of his abiding interests.