A brief profile of John Beaty 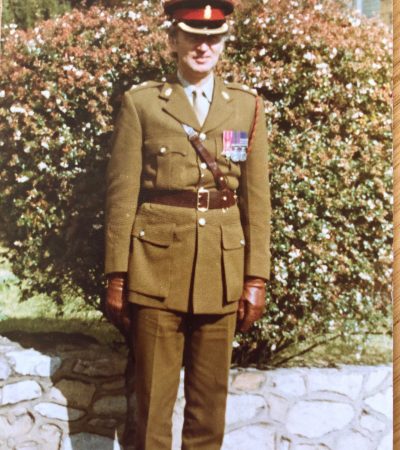 John Beaty was born in Keswick in the Lake District of North West England on 8 October 1932. He is the only son of Jack & Clarice Beaty who moved from Keswick in the mid 1930s to the outer suburbs of London eventually living in Harpenden Hertfordshire where John went to prep school during WW2.

In 1946 at the end of the second world war John was sent to Ardingly College in Sussex where he completed his secondary education. In 1951 having passed the exams and interviews he started the 2 year training course at the Royal Military Academy Sandhurst and was commissioned in 1953. His first appointment was in Germany in the British 2nd Infantry Division and he went on to serve a total of 6 years in the British Army of the Rhine. There followed tours in Cyprus during the Eoka terrorist campaign, 3 years in Singapore and Borneo during the Indonesian Confrontation, 2 years in Northern Ireland during the IRA campaign  and 2 years as an exchange officer with the Australian Army, all interspersed with postings in the UK.

In 1974 John was promoted to Lieutenant Colonel and appointed as Commanding Officer of the Ordnance Depot in Belfast, supporting the British forces fighting the IRA terrorists. He was awarded an Officer of the Order of the British Empire in the special Northern
Ireland list for distinguished service in 1976.

John was married to Shirley in 1955 and the had two children, Simon and Rachel. The marriage ended in 1977 in Australia.  John married Jeni in 1979 and they have been happily married for 39 years and have 9 grandchildren and 2 great grandchildren.

In 1980 John resigned from the Army and with Jeni emigrated to Australia where they settled in Melbourne. After a brief spell owning a motel in Leeongatha John worked for Target Australia, Coles Myer and Myer Stores from 1981 through to 1990. He then worked as a management consultant in business logistics and as a part time lecturer at RMIT University.

John has volunteered with the RSL and was Treasurer and Vice President of Beaumaris RSL and is now a Legatee with Melbourne Legacy. He is also a long-time member of the Beaumaris Rotary Club and more recently the Beaumaris Probus Club.