Rod Kelly will be drinking and describing a very special Talbot’s Block 2013 “ The Sultan” Shiraz from Seven Hill  Clare Valley South Australia and he has put some notes together on his wine for the zoom meeting:-

There is a short story about my Talbots Block “the Sultan”.

The couple, Alex and Bill Talbot who own and run the small  winery bought the property in the Clare Valley in 1997 their aim to grow premium grapes. They worked overseas often in diplomatic roles coming back to Australia in 2009. 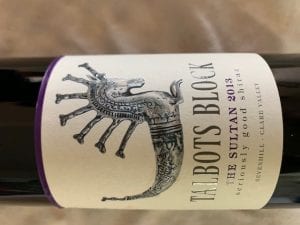 Rod alone will be tasting this wine !

Most of their vintage is sold to major companies for their high end range but they retain enough for their own small batch production.

Haliday’s “Wine Companion 2019 had the 2015 Sultan rated at  96 pts which was around the Penfolds bin 389 rating. They have won many awards but only sell from their cellar or on line

Our friends usually hold a couple of tastings for them each year at their house in Northcote. They only make 2 wines, their best grapes going into their Sultan which is 14.9%. It sells for around $40 and the Prince is around 14% sells for $40   Wendy and I will open a bottle a day before our tasting.”

Christmas Lunch 2018 at the Lobster Cave

Our Christmas lunch was held at the Lobster Cave on December 20th . Nine members and two guests, Ralph Butcher and Rod Murrell enjoyed a scrumptious three course lunch, with plenty of choices which all members in attendance said it was great value at $39 per head. After two bottles of French bubbly we had a Italian Pinot Grigio, Petaluma Riesling, Kendall- Jackson(USA) Chardonnay ( a standout), followed  by a Bellarine Peninsular Pinot Noir and then four bottles of various varieties of red wine.
A great time was had by all! 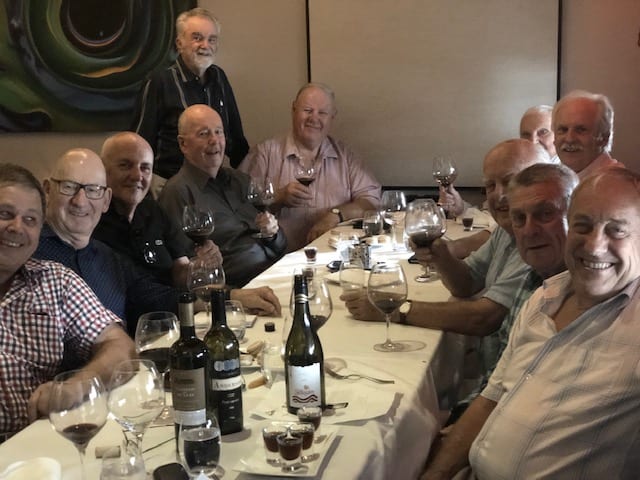 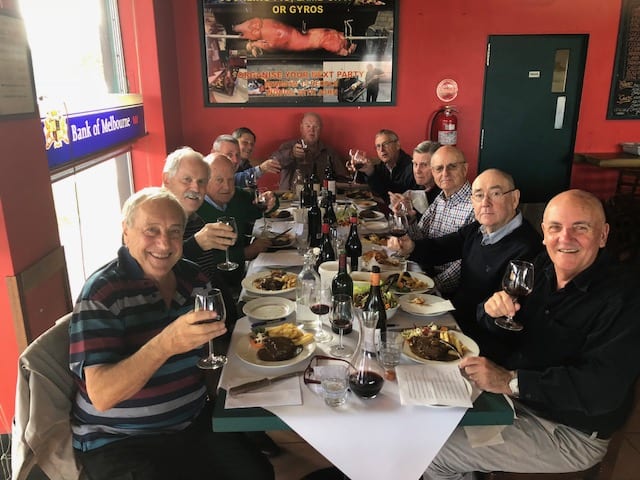 On Friday May 4th –11 of our membership of 15 had a great steak lunch and red wine tasting at the Steak Bank Restaurant in Ormond—near the rail station in North Road. As one member said” it was the best ever selection of Red wines at our meetings”
In a very close rating no less than 7 of the 11 red wines were rated by all 11 members:

No 1  2007 Seppelts Benno Shiraz from Bendigo (Vic),
No 2 2013 Blue Pyrenees Section One Estate from Avoca(Vic)
No 3 1998 Stanton and Killeen  Jacks Block Shiraz from Rutherglen ( Vic)

A very tight voting pattern!
Our next meeting is on Tuesday 24th July at Barry Amond’s studio where it will be tasting of red wines $20 and below, 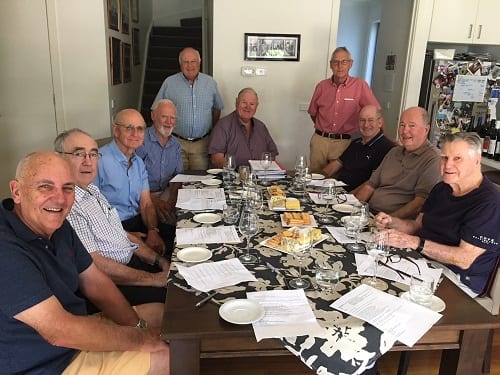 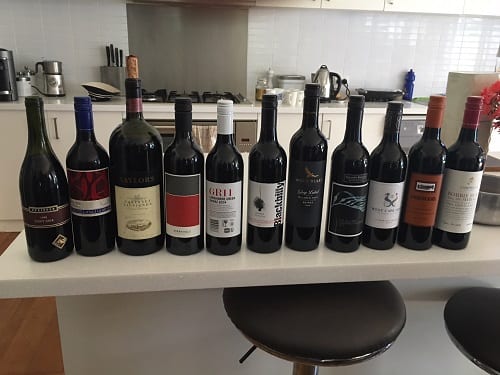 One of our 11 members and very experienced red wine taster who attended our first wine tasting for 2018 on Tuesday 27th February—commented it was “the best selection of red wines we have ever sampled”
From the 11 bottles of Red Wines sample tasted –the three more mature wines were voted best—equal first in the voting on a count back was a 2001 Taylors Magnum of Cabernet Sauvignon (Clare Valley SA), from a 1999 Pinot Noir Pfeiffer’s of Wagunyah( NE Victoria )—yes a 19 year old Pinot Noir still very drinkable and in third place a 2008 Mount Langhi Ghiran Billy Billy Shiraz (Ararat Vic)

Christmas Lunch at the Lobster Cave 2017 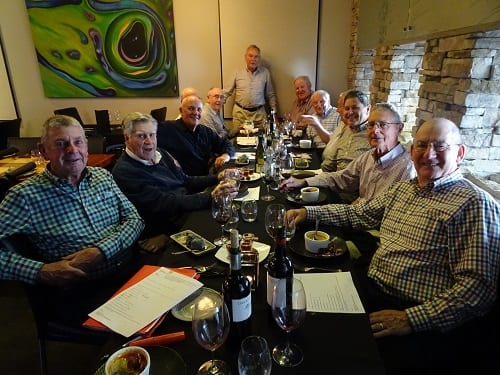 Twelve members had a magnificent three-course lunch at The Lobster Cave on December 5 with special guest Ralph Butcher in his 100th year.

Our first meeting for 2018 is Tuesday February 27 with red wines at Convenor Roger Wilson’s home @ 2pm.

Christmas Lunch at the Lobster Cave 2017

Ten of us had an excellent and very merry lunch at the Lobster Cave on 13th December.

The three course menu was simply superb at just $35.00…which included a glass of Port. (see below)
We also enjoyed TEN bottles of wine which added to the merriment and gave some of us a big headache later. (see below).

Congratulations Roger Wilson for starting and leading our Wine Appreciation Group. I’m not sure how much we are learning about wine but we certainly know how to appreciate it! 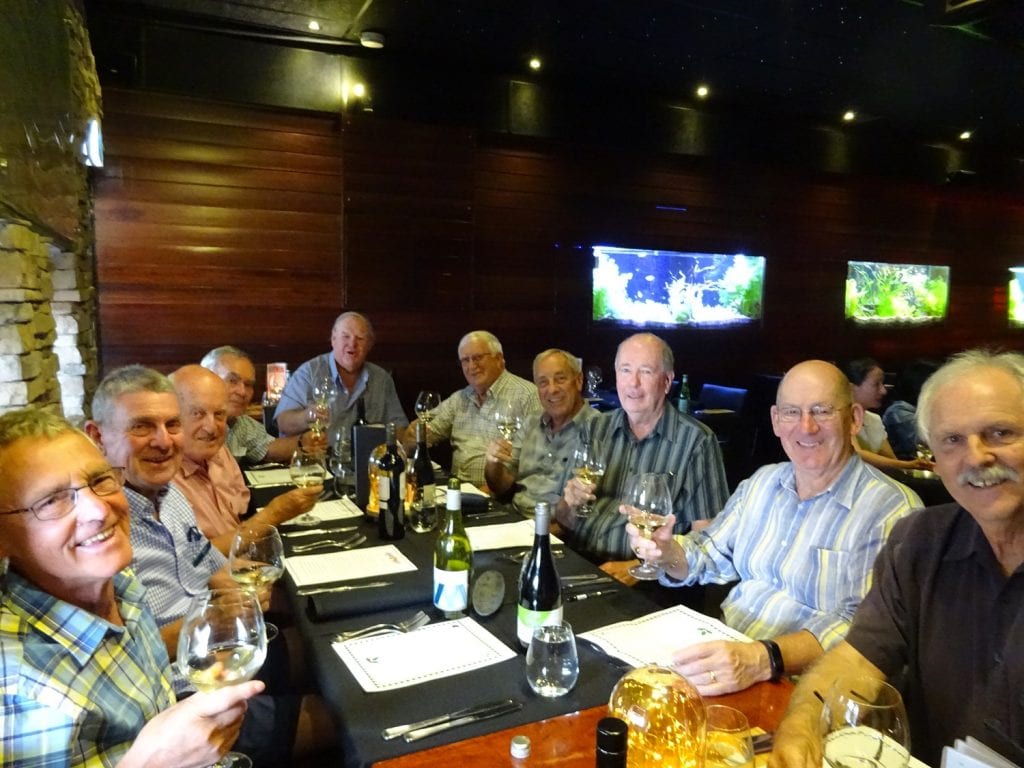 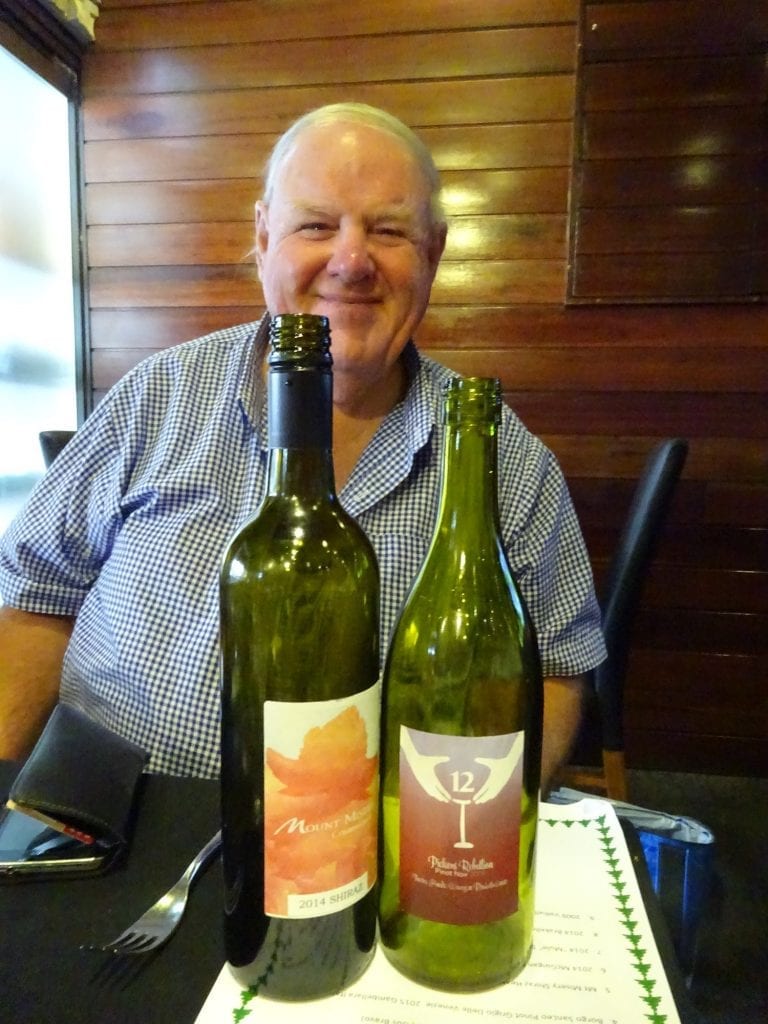 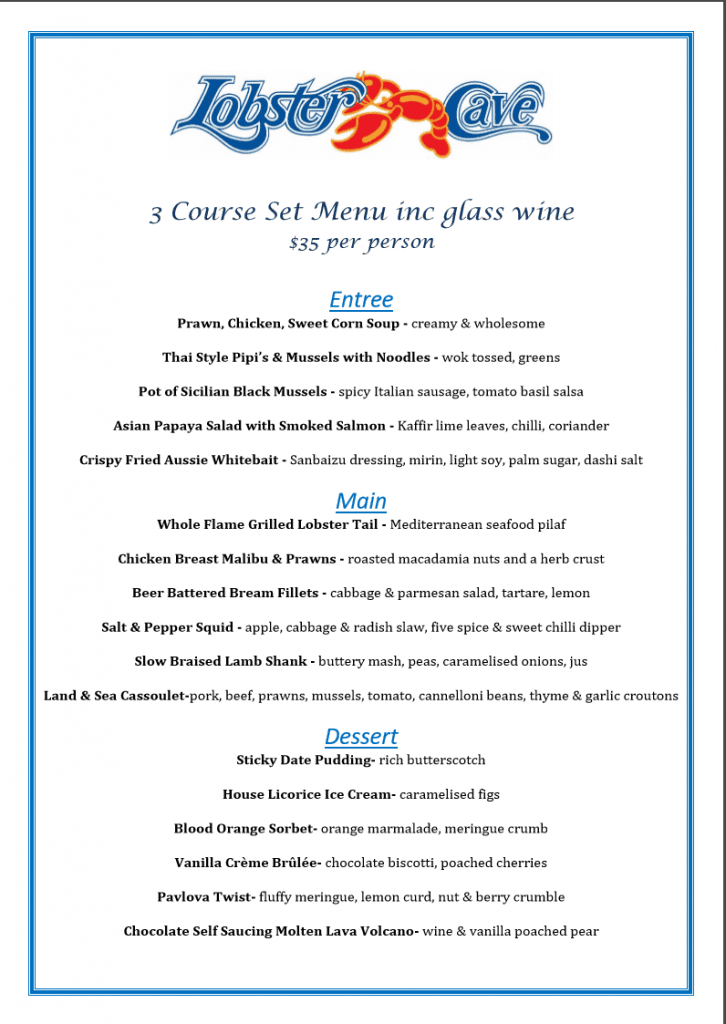 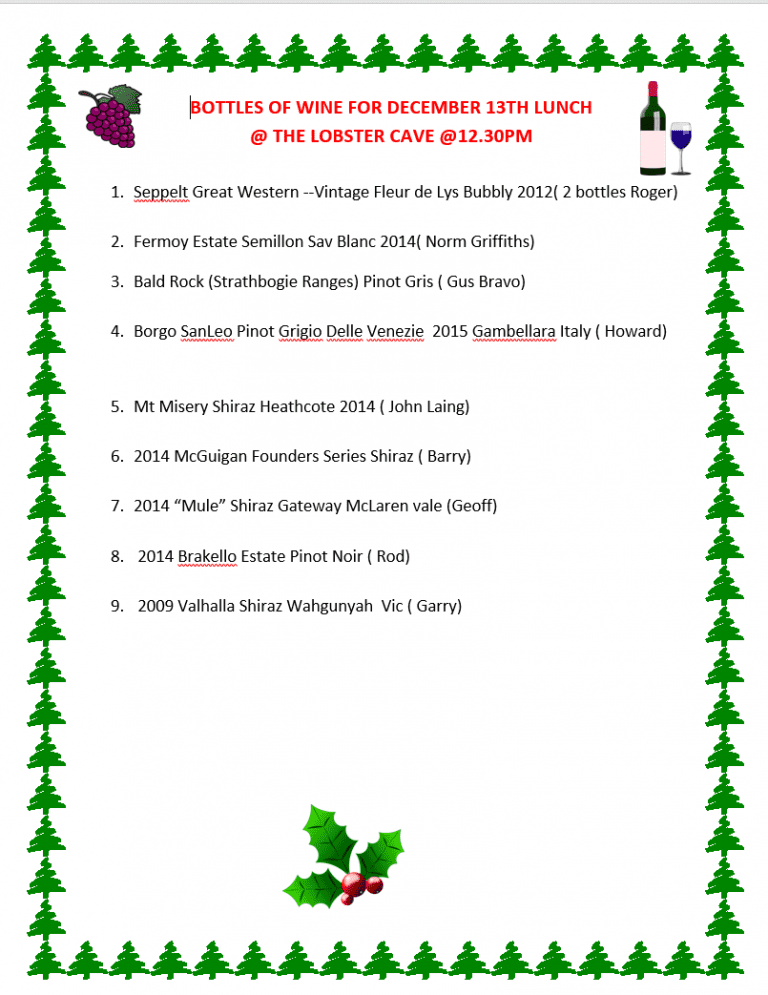 About the Wine Group

We meet five times a year to taste wine, learn something about wine, and have a pleasant few hours together. In addition, in 2015, we had an excellent Christmas Lunch at the Lobster Cave, Beaumaris and sampled an impressive selection of wines brought along by the Members.

We’re not experts and there is little pontification. There’s nothing worse than a bunch of wine snobs!  Nevertheless, amongst the 16 members, someone usually has something useful to contribute about a particular wine, style or whatever is on the agenda.

Our leader Roger Wilson sets the agenda and arranges for some members to bring a bottle along and usually nominates a theme such as variety, Country, Region etc. The meetings last about two hours and are most enjoyable!

There were 11 members at our first white-wines only tasting at Kevin McDonnell’s home. Bottles sampled included Italian prosecco followed by Pinot Gris (and Grigio), two Chardonnays, vintage Semillon, a 2004 Riesling, a WA Verdelho,  and finishing with an orange Muscat and an extraordinary 20-year-old Sauvignon Blanc brought by Alan Farmer – a talking point along with many other topics in a very pleasant two and a half hours.

The one white, a Chardonnay Montes Alpha from Aurelio Montes winery in Chile was widely acclaimed!  The 6 bottles red wines were a variety of different grapes 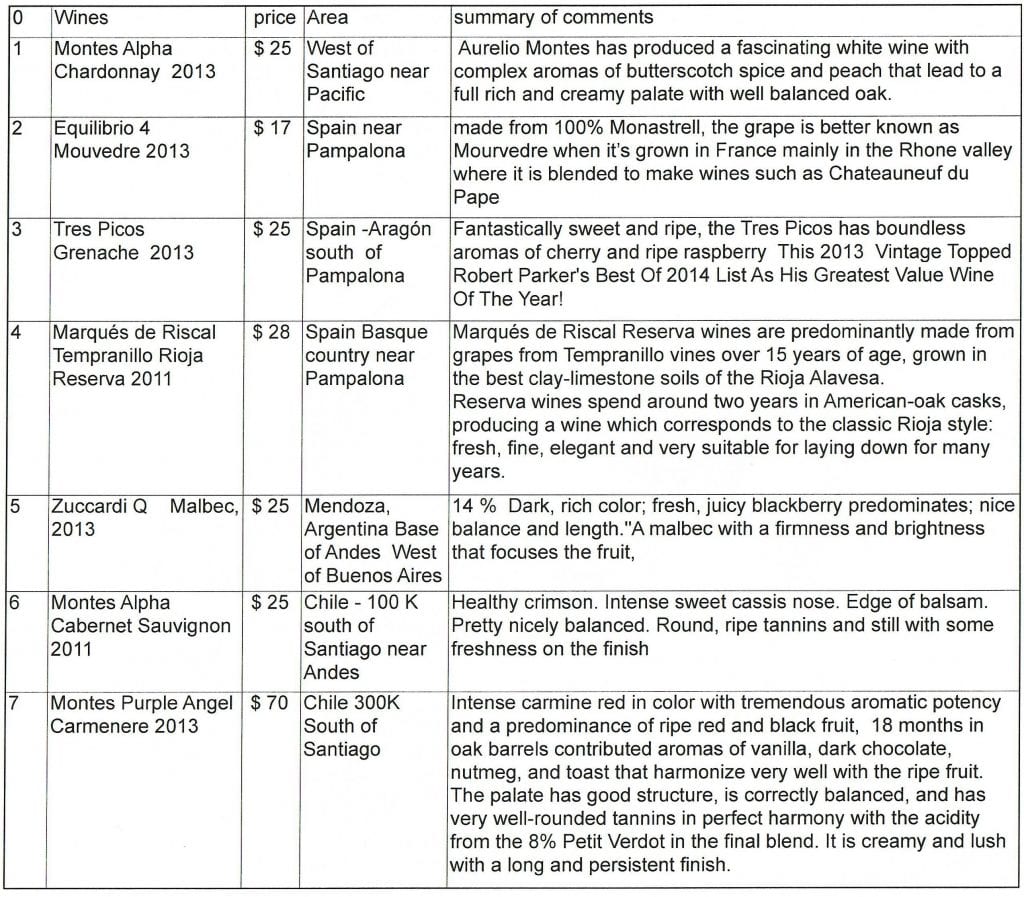 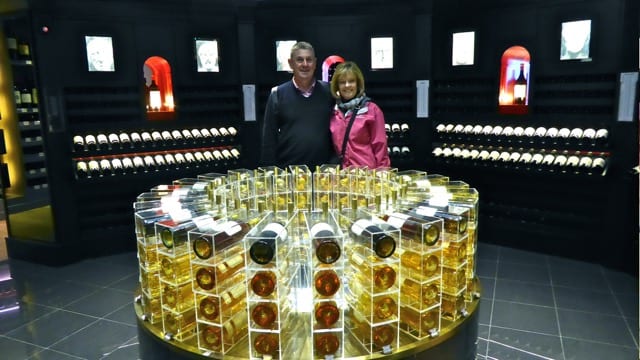 Rod and Wendy Kelly admire the Chateau Lafite display in Paris – A bottle of Chateau D’yquem was Euro 42,000

The Wine appreciation Group is limited by numbers due to space but if you are interested in joining the Group, contact Roger Wilson on rbwservices@bigpond.com Your name would be added to a waiting list and if there is sufficient additional interest, consideration may be given to form a second group.