A brief profile of Geoff Wade 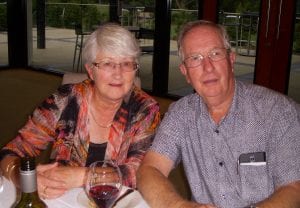 Geoff has been a member of Beaumaris Probus since 2002 and has held a number of appointments including Newsletter editor (2005-2008), President (2009), Member Register (2005 – current), Grapeviner(2011 – current), Meeting Co-ordinator(2014 – current) and Digital Technology interest group convenor (2012 – current). He was awarded Life membership of Beaumaris Probus Club in February 2018.

Geoff has three children and four grandchildren and has been an active golfer at Southern for 33 years. He has been married to Margaret for 53 years.

Geoff spent 21 years with the RAAF in Melbourne, Adelaide, Wagga, Canberra and finally back in Melbourne as an education officer, mostly involved with the management of training.  During his nine years in Canberra, he was involved in officer training, preparing officers for promotion to Squadron Leader and, later, on the staff of the Staff course, training Squadron Leaders and Wing Commanders for senior appointments.  He also spent three years in Air Force Office where his work included responsibility for some of the non-financial conditions of service such as resettlement to civilian life and integrating RAAF members into the Army Health Benefits scheme.  As a result of initiatives in this area, he was appointed a Member of the Order of Australia (AM) in the Military Division in June 1983.  In 1984, he was transferred back to Melbourne as the Project Officer for the establishment of the RAAF College at Point Cook.

When he retired from the RAAF (1987), he took up a position as manager of first aid training with Red Cross for almost three years and then a similar position with St John Ambulance for more than five years. He subsequently ran a VIP lawn mowing business in the Moorabbin area.

He retired in May 2001 and now enjoys playing golf and travelling. In his spare time, he enjoys marquetry which involves creating pictures from thin veneers of wood, each of which could take as much as 200 hours to complete.