A brief profile of Bill Davis 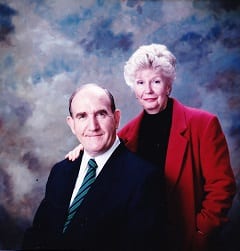 His work then involved him in evaluation and mine construction associated with copper, gold, nickel, potash and mineral sands projects in China, Indonesia, Fiji and South America as well as in Australia.

When he retired in 1996, at the urging of his wife, Judith – a long-time member of VGC- Bill took up golf. “Too late,” he now says, “Golf is a game you have to start when you are young.” But he has other more absorbing interests. With a ‘bent towards malts’, he was a founding member of PRISMS; and he is also interested in music, attending concerts and operas, as well as Barry Amond’s music nights, several times a year.

However, his primary hobby is collecting early English drinking glasses. Bill tells us that glass-making up to the late 17th century was dominated by the Venetians and the Germanic states. In the late 1670s, English technology was responsible for the development of lead crystal and for important developments in the design and decoration of hand-made glass. These developments placed the English glass industry on a pedestal for the next 200 years. Not surprisingly, Bill lectures on early glass to antique collector clubs and at The Johnston Collection in East Melbourne.