A brief profile of Alan Trumble 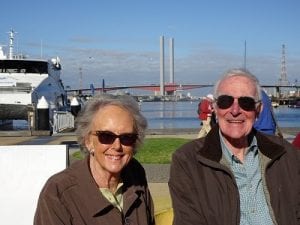 Many will remember Alan speaking to us about his 50 years plus in the Textile Industry or “rag trade”. During his time, he saw dramatic changes taking place in local manufacturing industries in Australia and was rarely far from the action.

After his early apprenticeship as a junior salesman selling fabrics to manufacturers and retailers, principally up and down the industry’s traditional home, Flinders Lane, he then had sales experience with several companies, mainly in women’s wear: hosiery, knitwear, underwear, skirts and sleepwear.

Following this he joined Jann’s father’s business who were agents and importers of textile machinery and raw materials. This ranged from cotton sourced in the Americas and India, yarns manufactured in Australia and overseas, man- made fibre from Germany together with English, Swiss, Italian, American and Australian textile machinery.

“It was”, he says, “a very exciting time.” The morning mail often brought new developments, everything from new machines for blanket and carpet production to technological break throughs in hosiery (for example, seamless hosiery compared with the traditional full fashioned with a seam) that initially could knit a stocking in 12 minutes and within four years reduced it to 4 minutes

After nearly nine years he was offered an opportunity by one of his clients, Kayser, and joined as General Manager NSW for 3 years and then 5 years as Lingerie Merchandise Manager back in Melbourne, but he was feeling he might have had enough of working as an employee. He decided to start his own small lingerie business-Pedita Pty Ltd- where he could see an opportunity as a volume supplier to the rapidly developing discount stores.

Fortunately, the business expanded rapidly primarily with the growth of Target Stores and at peak employed some 400 people having acquired his major competitor, Diamond Cut Lingerie. Apart from being CEO, he was also President of the Textile Council, taking on Canberra over tariff cuts, a losing battle. “I began to see the writing on the wall” Alan says. “it was inevitable”.

Gradually he moved his manufacturing operations to China – which brought its own problems- and he associated his company with Hong Kong/China controlled companies where they provided the manufacturing and the re-named Diamond Cut International controlled the product development and marketing. “It wasn’t easy, influence is often the way they do things there and it is necessary to understand both the temperament of the people and respect their customs”.

The people Alan felt sorry for most were Australian blue-collar workers who lost their jobs; 50 year old Italian and Greek migrants who had pride in their work and suddenly their job was gone. He feels that the major changes made in Australian manufacturing were made too rapidly without time for adjustment. “It was very sad and traumatic he says”. He retired in 2002.

Nowadays his interest is centred on his holiday home at Mt Martha which he and Jann retreat to as often as possible. “A bit of the Dandenong’s beside the beach” he calls it. He has been active in Rotary for 18 years and likes a weekly game of bridge but because his wife says he won’t improve at that rate, he is trying to play twice.

We have enjoyed our retirement to the full, with local and overseas travel although overseas long- haul flights are now discouraged. After some 26 years we have handed over the occupancy and upkeep of our Mto Martha retreat to our elder son for future generations of the family to enjoy this special spot.