A brief profile of Alan Farmer 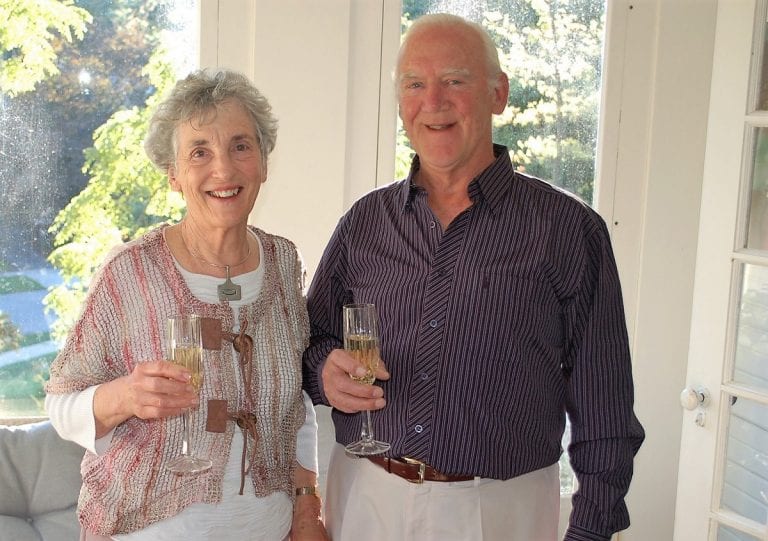 Alan and Robyn Farmer at their 53 wedding anniversary.

Alan is a long-time resident of Sandringham and Black Rock.  He was born in the Mallee town of Hopetoun, Victoria, but following a fierce dust storm, emigrated to Sandringham when he was six months old. His five years as a chorister at St Paul’s Cathedral, Melbourne, stimulated his lifetime love of music. As well as the usual participation in cricket and football he broke swimming records at Trinity Grammar and was later stroke of the Melbourne High School crew in 1951 and rowed with Banks rowing club on the Yarra river. He now attempts to play golf as a member of Victoria Golf Club.

He was educated at Melbourne University in Commerce-Accounting, Economics, Education – but also Psychology. He was a schoolteacher for a few years before he was invited to undertake a psychology training placement. He spent 25 years with the Education Department and became their Principal Psychologist and then Director of Student Services. During this time, he lectured in psychology at Melbourne, Monash and Latrobe Universities and RMIT. After retirement, he set up a private psychology practice in Brighton for ten years. This work included clinical therapies as well as management consulting, training and staff selection. He completed a Diploma in Clinical Hypnotherapy and used hypnosis to treat various phobias and working with family and relationship problems. He was a founding member of the Australian Psychological Society, was a signatory to the Memorandum of Association and Articles of Association of that Society in 1964 and elected a Fellow and Life Member. Alan and his wife, Robyn, (who is also a psychologist) have three children – one living in the United States – and seven grandchildren.

Alan and Robyn are great travellers. He won a flying scholarship when he was nineteen enabling him to learn to fly tiger moths and chipmunks to become a private pilot. He remained an active pilot for thirty years and at various times flew around much of Australia in Cessnas and Pipers with his wife and occasionally, his children.  Their visit to Broome in 1965, on their way to the Kimberley, was memorable because the town’s population then was so small – it’s only bitumen roadway was 100 yards in the main street. He says he has wandered around the world a few times in commercial aircraft, especially to places in Europe, but has now run out of enthusiasm for castles, churches, chateaus and villages.  However, he retains a strong fascination for, and visits, America as a destination because of its great diversity and kind, interesting people.

His love of honey moved him to become a part time apiarist for about fifteen years -until he was comprehensively stung by a hive of rogue bees which persuaded him to retire from that activity.

He has worn out two 4-wheel drives traversing the deserts of Australia from East to West and North to South.  He regards his most interesting trip as crossing the Great Victoria Desert 20 years ago – Australia’s ‘Dead Heart’.  He and Robyn travelled over 1800 kilometres from Laverton (WA) to Coober Pedy (SA) at a time when there were no signposts, petrol or water. They used aeronautical maps, one of the first models of a GPS, and the stars to guide them.  Only two other vehicles were reported to have undertaken the trip that year.

These days his travels are restricted to eastern state resorts and the ‘hut’ which he built on his property beside the Goulburn River and Lake Eildon at Jamieson, where there are no crops or commercial animals but plenty of kangaroos, wallabies, wombats, echidnas, snakes, and flocks of beautiful birds – and blissfully, no TV, and poor mobile phone and internet connection.

Alan was Beaumaris Probus Activity Organiser for two years and Beaumaris Probus President for 2011. In the days when computers were a new thing of wonder to Probus members, he organised a program of computer literacy of which about sixteen members availed themselves.  He followed that up by initiating a Digital Electronics group which Geoff Wade ably convenes to this day. In 2008, Alan initiated the Candlelight Dinner which has become a popular annual event. When he was Vice-President, he organised a fun golf day competition to be played between a team of four members of Victoria Golf Club and any teams of four from other golf clubs who were represented in our Probus Club. Unfortunately, only one other club – Southern – could muster a team of four. However that it is a day of fun is epitomised by the day’s incredible fun trophy – the Victoria Cup – that has been disparaged and fought over in jest in a delightful day between Victoria and Southern for the past eight years.

In 2015, together with Bruce Tomkins and wives, Robyn and Gill, he initiated a Probus Bridge Group with Gill as the chief guru. It has become very popular and is now meeting weekly at Victoria Golf club.